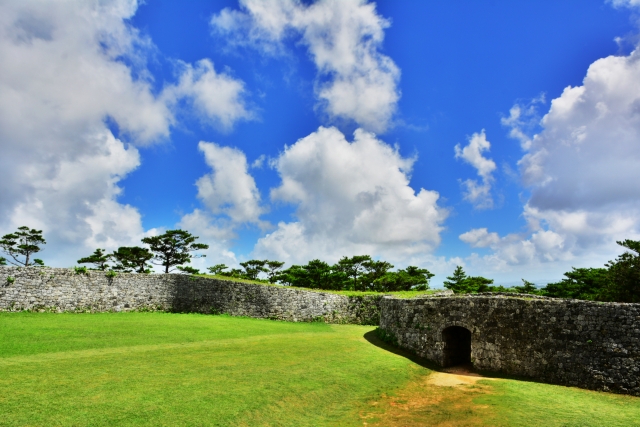 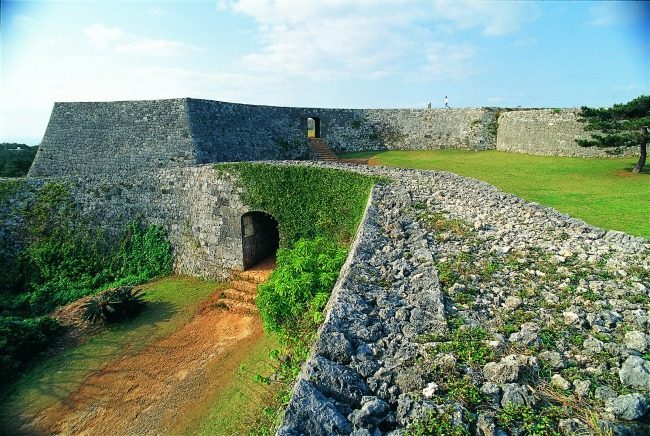 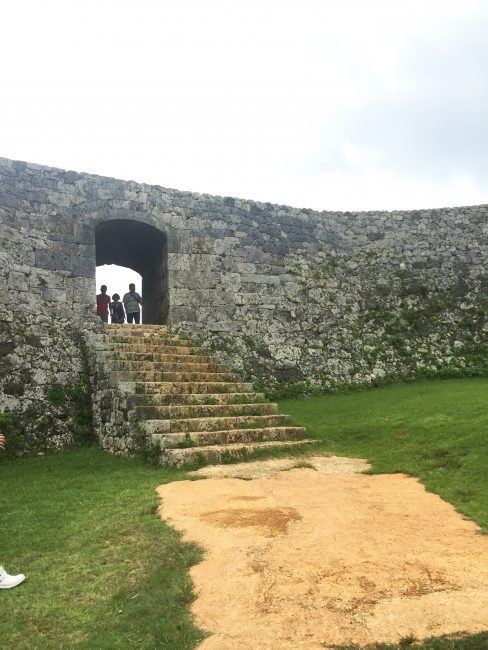 Zakimi Castle Ruins are on a hill at an elevation of 120 meters and are composed of 2 enclosures (the 1st enclosure and 2nd enclosure). Each of the enclosures has an arch-shaped stone gate with a keystone at its center, which cannot be found at any other gusuku in Okinawa.

Including the castle walls, the enclosure has an area of 7,383 square meters. At its high points, the castle walls reach 13 meters tall and at its low points is only about 3 meters high. The walls are made with Ryukyu limestone and are mainly constructed with a masonry technique called aikata-zumi (cutting rocks to fit), although there are also areas of the castle that utilize other techniques such as nuno-zumi (piling up rectangular rocks in layers of similar heights) and nozura-zumi (piling up natural rocks). From an aerial view of the castle walls, you can see that they have many curves.

In archaeological surveys, the remains of a square-shaped stone building 16 meters in width was found. In the group of rocks there is limestone gravel laid on the ground and it is believed to have been a building where a compass was stored. No rooftiles were discovered and its roof is believed to have been thatched or made with shingles. Furthermore, a building (posthole) that existed before the castle walls were built was found below the castle wall on the southern side of the 1st enclosure.

Zakimi Castle is said to have been built by the famous castle builder, the lord of Yuntanzan named Gosamaru in the beginning of the 15th century.

At the time Gosamaru ruled Yamada Castle, located 4 kilometers northeast of Zakimi, but in 1416 (or 1422) in order to help capture the Hokuzan Castle (Nakijin Castle) for Sho Hashi of Chuzan, he decided to build a new castle at Zakimi due to its favorable location.

Zakimi Castle Ruins were designated as and important cultural heritage property of the Ryukyu Government in 1956 and when Okinawa was returned to Japan in 1972, it became a nationally designated historical site. From 1973 to 1985, with funding from the Agency for Cultural Affairs and Okinawa Prefecture, excavations were conducted at the castle ruins and the castle walls were repaired. Today, it has become revived as a place where visitors can experience history.

On December 2, 2000, the castle was registered as one of the world heritage properties included in the Gusuku Sites and Related Properties of the Kingdom of Ryukyu.

■Zakimi Castle Ruins in recent times
According to the 1713 “Origins of the Kingdom of Ryukyu”, the shaman of Zakimi worshipped gods on the castle grounds known as Kobazukasano Oibe, Manezukasano Oibe and the castle’s god of fire. An incense burner has been placed in the 2nd enclosure near the arched stone gate and people come here to worship the god of the Zakimi area.

In the 1st enclosure is a lantern donated by Zakimi Uekata in 1843. Zakimi Uekata, who is also referred to as Me Kotoku Zakimi Uekata Seifu, was a descendant of Gosamaru. As Zakimi Uekata was successfully able to complete the Ryukyuan Mission to Edo, the lantern was offered to show his appreciation to the castle gods.