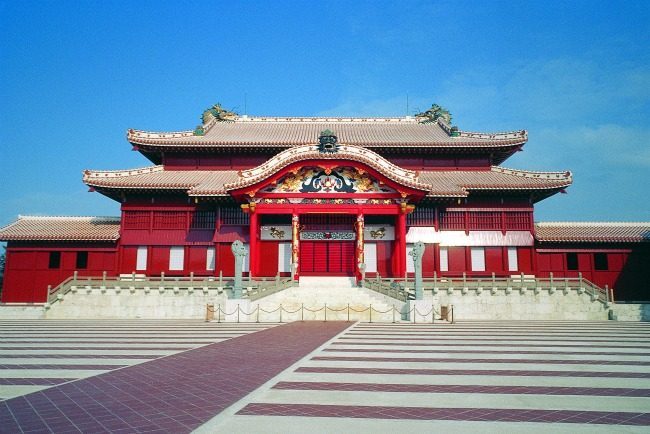 Shurijo Castle is divided into the inner enclosure and outer enclosure. The inner enclosure was completed in the beginning of the 15th century and the outer enclosure during the middle of the 16th century. Starting with the main castle building, all of the buildings of the castle are positioned along the northwest axis, facing in a westward direction. The westward-facing buildings are one of the characteristic features of Shurijo Castle. Due to its long history of exchange with China and Japan, both Chinese and Japanese architectural influences can be seen everywhere. The main castle building, south hall, and north hall are representative examples.

After the banishment of the king from Shurijo Castle in spring of 1879, Okinawa Prefecture was established, and Shurijo Castle was used as a Japanese military base and school. In the 1930s a large-scale restoration project was conducted, but the entire castle burned down due to attacks by the U.S. military in 1945. Post-war, the site of the castle became the campus of the University of the Ryukyus, but after the university was moved, and restoration efforts were promoted. The restored castle was based on the castle built in the 18th century. The ruins of Shurijo Castle were designated as a World Heritage site in December 2000.

Unfortunately the restored castle burned down in a fire in October 2019 and restoration efforts are currently underway. Admission to the castle is permitted and you can see the devastation of the fire and reconstruction efforts.