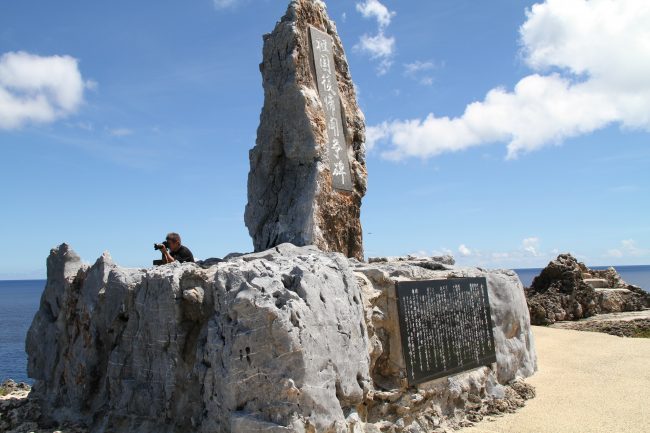 Ocean view only visible from the northernmost point of Okinawa Island

Cape Hedo is located at the northernmost point of Okinawa Island and is an outstanding scenic spot that we recommend visiting if you plan to go to the northern part of Okinawa Island. Beyond the precipitous cliffs formed by eroded coral reefs the Pacific Ocean and East China Sea intersect and the clear blue sea extends as far as the eye can see. On clear days you can even see Yoron Island and Okinoerabu Island.

During the summer the waves are calm and when the sun is directly above it seems like you can see to the ocean floor of the beautiful sea and during winter the north winds along with splashing rough waves are a sight to see. It is renowned as a spot for viewing the first sunrise of the new year and is bustling with many people on new year’s day.

As the parking lot and walking paths around the cape are maintained, those with strollers and wheelchairs can enjoy the area as well. It only takes about 10 minutes to do 1 lap around the walking paths. However, there are many sharp coral rocks in the areas around the paths and there are no railings in front of the cliffs so caution is necessary.

Furthermore, when Okinawa was under American rule, supporters of the return of Okinawa to Japan lit beacons towards Yoron Island at Cape Hedo, as Yoron Island was the border of Japan. At the cape there is a Yoron Island and Kunigami Village Friendship Monument and a Struggle for Return to the Motherland Monument erected to commemorate the return of Okinawa to Japan. As you admire the sea while contemplating the feelings of the Okinawan people as expressed through the monuments, you may see the ocean differently.